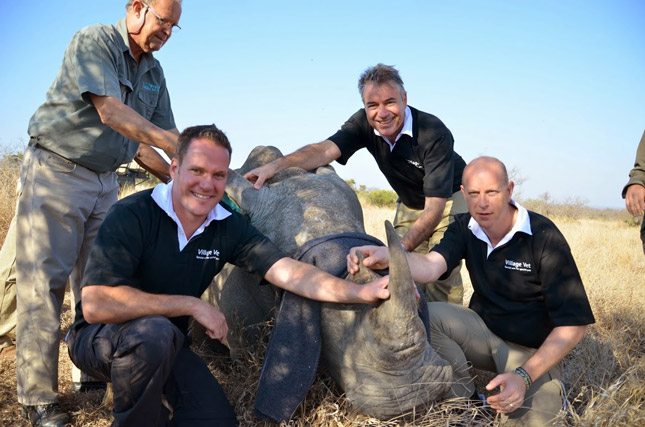 Vet’s from Village Vet helping to save the rhino

I was recently at Klaserie Game Reserve – 60 000 hectares of prime South African bush on the western edge of the Kruger park. I had organised this expedition to go together with 2 other Village Vet vets, Simon Hayes and Russell Welsh, and 3 other close friends, also UK vets. We had given a fair size donation to take part in this scheme to try protect rhinos from poaching.

The Black and White Rhino face extinction as they are professionally poached in a barbaric and horrendous manner for their horn. Rhino horn is sort after and sold for vast sums of money, for use in traditional Chinese medicine. Hundreds of rhino are killed each year for their horn. In 2013, 1004 rhino were killed. So far in 2014, 787 have been killed.

One of the few initiatives to protect the rhino is being done at Klaserie. Here each rhino gets microchipped and their ears are notched with a unique pattern. The aim being that should the rhino be killed, it can be identified and should a hoard of rhino horn be found, the horn can be identified too. This will improve the chance of poachers being prosecuted. Village Vet, having previously supported wildlife projects together with Durrell Wildlife for many years, has now committed to raise money to fight rhino poaching.

We drove from our lodge to meet Dr Pete Rogers, the well known wildlife vet, and the Game rangers of Klaserie Game reserve. Along the way we passed, as you do, some wild dogs, a rhino, and some kudu. After a brief introduction to the project and an allocation of tasks for each of us, I went up in the helicopter to locate a rhino that had not yet had its ears notched. After three rhino sightings we eventually found a large female that had no notches in her ear. We returned and landed and let Dr Pete Rogers, take over in the chopper so he could dart and sedate the rhino. 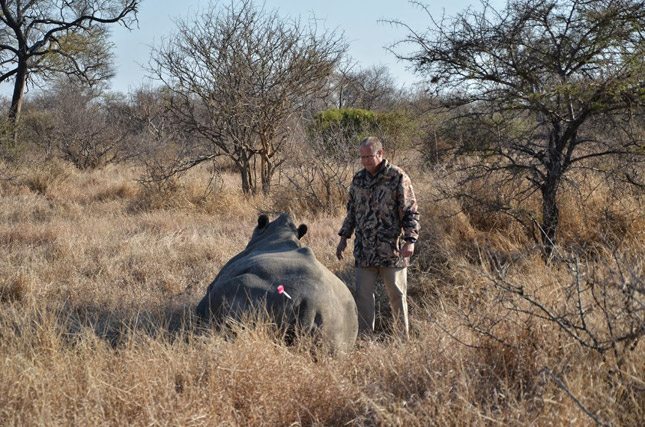 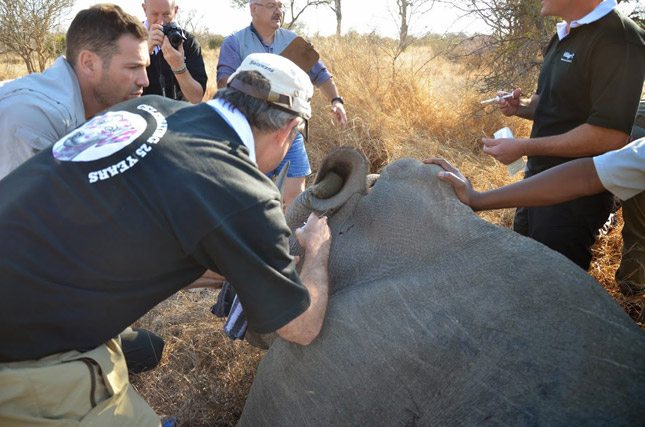 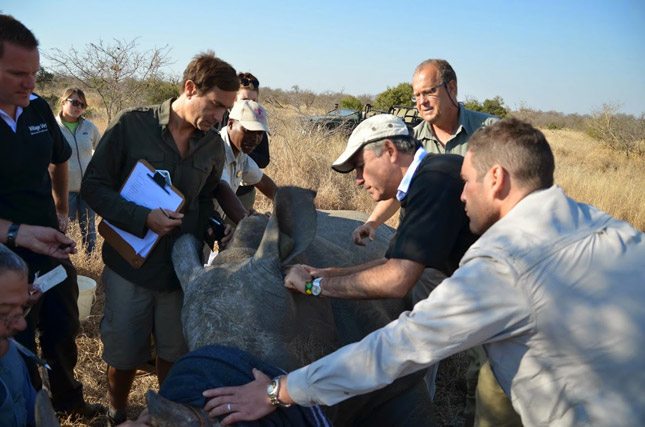 We raced to the spot in our land rover, each vet with a specific task. One to place a blanket over the eyes, one to place a huge sock in each ear, one to monitor respiration rate, one to place lubrication gel in her eyes, we thought Simon Hayes, our Village Vet ophthalmologist would be best at this! Russell and I each inserted a microchip behind each ear. A long narrow hole was drilled into the keratin horn to place the microchip – the hole was filled with a stick and bit of Alcolin glue. 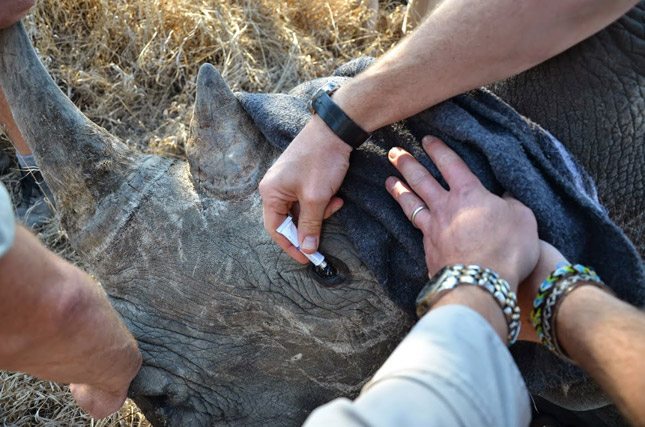 Then the ears were notched. The Klaserie rangers have a system that enables them to identify each rhino. Triangles were punched out of the ear margin at specific sites indicating a unique number. The ears were clamped to stop the haemorrhage and then usual blue wound antiseptic was sprayed on each ear. A blood sample taken and within 10 – 15 minutes, the job was done.

The antidote was given and this beautiful huge beast stirred and stood and very soon was walking off with a drunken gait into the bush. Another rhino microchipped – and marked. 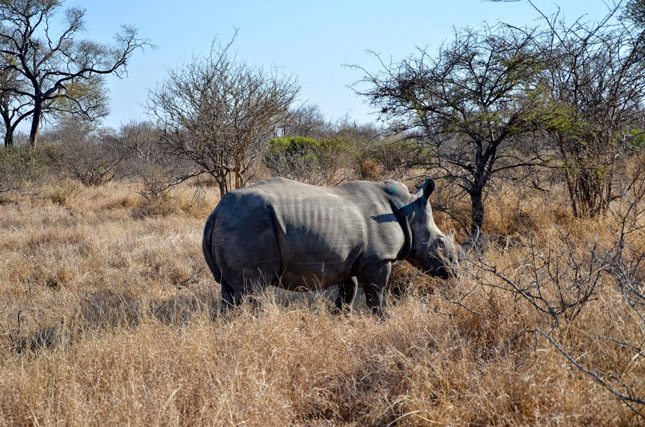 There are a few other projects set up to save the rhino. This is a war against rhino poaching that must be won. A large dog unit has been trained using Belgian shepherds and rottweillers to track down poachers. Rhinos are also being translocated to safer game parks. Money has to be raised to support these initiatives to save the rhino from extinction.